Artist, pianist, and guitarist and songwriter for instrumental math-rock band Covet, Yvette Young shares how teaching herself to play guitar empowered her, explains how she developed her playing technique, and tells us why she brings her THR30II Wireless with her on tour.

Hi Yvette. Thank you for taking the time out to chat with us. Can you tell us about your musical projects?

These days I mainly tour and play with Covet, we’re a mostly instrumental 3-piece band. In addition to that, I have a solo acoustic project where I sing, and also have a piano project that is more “soundtrack” based. I play violin in the studio for these projects as well.

You have a classical background, first learning piano and violin at a young age before picking up a guitar. Can you tell us about your journey as a musician?

In retrospect as an adult, I am so, so, so grateful for my classical foundation. I think it gifted me a couple of things: self-discipline with practice, the ability to memorize large chunks of music, developing a good ear, developing musicality through dynamics and touch, and the ability to play and work with others by being a good listener. I also was able to practice playing in front of large crowds and work through performance anxiety. These are all valuable tools I still use today with guitar and the other instruments I play.

However, I would say the journey hasn’t always been rosy or easy. I hated the competitive nature of the classical world and the high-pressure environment combined with my internalized perfectionism contributed to me being sick with and eating disorder for a while. I actually used to hate music. I used to just play to satisfy other people’s demands and needs and felt no personal connection, especially when it came down to using music to compete with others. I didn’t fall back in love with music until I decided to teach myself guitar when I was sick in the hospital. Teaching myself a new skill and writing/playing music on my own terms really made me fall back in love with music as an outlet, and not way to compare yourself to other people, and I suddenly felt super empowered that I could teach myself a new skill and channel my emotions and pain into it. I’m so grateful for this turbulent journey because it has given me a lot of perspective into what is important and strengthened why I do what I do. I think otherwise, I might take having this outlet and platform for granted.

How has your classical background informed your guitar playing and style?

I guess If I had to boil it down to what it has done for my playing, I would say that it gave me an ear for polyphony and writing harmonies, as well as aided in translating what I hear in my head to my hands. I sing a lot of my lead melodies first, and it really helps to be able to instantly find those notes. I also will say that piano has helped a ton in my left hand and right-hand dexterity. I totally approach my fretboard like a piano, where lower strings are like my left hand and higher strings are my right hand, and I can compose and map out intricate melodies with built in harmonies just like how I would play them on piano. I even tap like I’m playing piano on guitar.

How did you first discover your passion for guitar?

I grew up going to a lot of punk/indie/emo/post-rock shows and always thought what the bands did up on stage was so cool. I know it was an escape for me. I could get away from my super strict academic and home life and just go to a show and lose myself in the music. I never imagined I would one day be doing the same thing. I think I truly didn’t fall in love with the instrument until I was alone with it in the hospital and started writing things as a way to get my emotions out and kill time. That’s when I discovered it was a really important outlet for me! I never really had guitar “idols”. I had guitarists in bands I really liked, like the guys from Toe, and Mike Kinsella from American Football, and Tim Collis from This Town Needs Guns. I think I’ve always been more attracted to songwriting and playing that conveys emotions rather than virtuosic guitar playing. Guthrie Govan shreds though!

Can you tell us how you developed your two-handed tapping technique?

I can totally attribute that to my piano background and also watching a lot of guitarists in “math-rock” bands do it! I always thought it was a great way to sound as full and polyphonic as possible as a solo guitar player and have built in harmonies and bass parts while you play the lead melody. I will say that playing in a band has allowed me to tone the tapping down a bit because now I don’t need to play my own bass parts at the same time, and I can let the other members shine!

You write music for your math rock band Covet; can you tell us about your writing process?

I start out most of the songs. I start with a riff. It can take up to 5 hours for me to “craft” one …I am really deliberate about the notes I want to use, hence my interest in composition rather than improvisation, although improv is certainly part of the process but not the final product. The final product is like refined improv. I then decide what part of the song the riff should be (intro, bridge, climax, outro etc.) and then I build the rest of the song around it. Once the song is like 90-100 percent “done”, I bring it to my drummer, and we hash out the rhythms/meter changes/tempo. He concretizes what I do so I know what time signature everything is in, because I don’t write with theory in mind, just feel and groove. Then, he hashes it out with my bass player and then we all play it together. If there are any parts missing or anything that doesn’t flow quite right, we usually problem solve together at that point!

When writing, what inspires you?

I would say that I’m mostly inspired by emotions and the desire to tell a story with sound. I use melody and tones/timbres/textures with effects to try to convey a mood or a scene. I would say that I feel like I am most successful when I can successfully convey and translate what I wanted to write to the listener. That’s always the biggest compliment- when someone comes up to me at a show and says “that second song, it made me feel really conflicted and ambivalent, like I was being pulled several directions at once and anxious” and I’m like “YES that’s exactly what I wanted the song to do”. Music isn’t always deliberate, but I like to be deliberate and have intention with what I put out into the world. I think one of the beautiful things about instrumental music is it’s a bit like abstract art. People can immerse themselves into it, and they might project their own lives and their own stories into it and feel empathized with. Maybe they see what they want to see and hear what they want to hear. Certainly, people don’t always get/feel the same thing as I do when they hear my compositions, but it’s a really cool bonus when they do!

Can you tell us about your experience with the new THR30II Wireless amp? How does it fit into your setup, and into your routine?

I actually use the THR30II Wireless to teach all my road lessons, as well as to practice and check my board before the show. Last headlining tour, I even brought it out to play during our VIP meet and greet performances. It was perfect for my acoustic guitar, but I also love that I could play my electric through it as well. Actually, for that same reason, I’m bringing it on a couple of UK and France clinics where I have to double shift acoustic guitar and electric guitar. I’m also using the Bluetooth to play my backing tracks through it! It’s seriously so versatile and useful, and easy to carry around!

What do you have coming up next that we can look forward to?

I have tons and tons of recording coming up in December! I am so pumped for this new music to be out. It’s our first full length, and I’ve poured my heart into making these songs. I also had a few traumatic events happen which made writing a bit difficult, but I ended up really pushing myself to write through the pain, which ended up being the #1 way I was able to pull myself away from it! So, these songs are very special and intimate, and I can’t wait to share them with the world. I’m truly proud of what me and my bandmates were able to do! 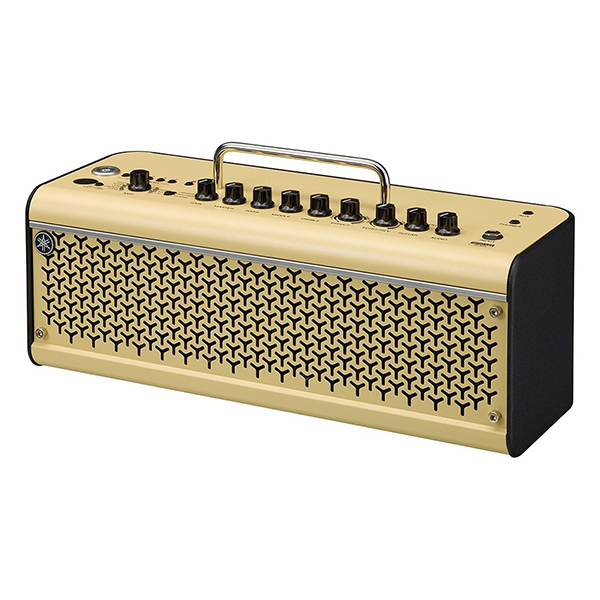